While many new EU member states experienced a crisis of democracy in the course of the fiscal and budgetary crisis in Europe, this was not true for Poland: Most citizens held democracy in high esteem and remained enthusiastic about EU membership. However, in 2015 they voted a Euro-skeptic government into office that began to dismantle the principle of checks and balances. The article analyzes possible explanations by applying a modernization theory approach. It shows that many Poles developed a utilitarian perception of democracy induced by economic development, but only a minority internalizes post-materialist values and participates in public affairs. [ Problems of Post-Communism ] 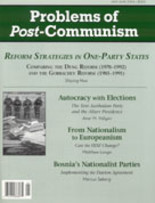