Fascism, Nazism, and Communism dominated the history of much of the twentieth century, yet comparatively little attention has focused on popular reactions to the regimes that sprang from these ideologies. Popular Opinion in Totalitarian Regimes is the first volume to investigate popular reactions to totalitarian rule in the Soviet Union, Fascist Italy, Nazi Germany, and the communist regimes in Poland and East Germany after 1945.

The contributions, written for this volume by internationally acknowledged experts in their fields, move beyond the rather static vision provided by traditional themes of consent and coercion to construct a more nuanced picture of everyday life in the various regimes. The book provides many new insights into the ways totalitarian regimes functioned and the reasons for their decline, encouraging comparisons between the different regimes and stimulating re-evaluation of long-established positions. [oupcanada.com] 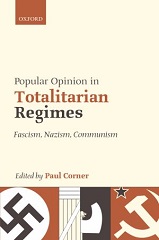